Here's this week's list of national embarrassments coming from President Trump, and the White House, for the week beginning 2 PM Friday, April 21st to 2 PM Friday, April 28th.  This is likely not all of the Trump team's transgressions, but it's most of them. 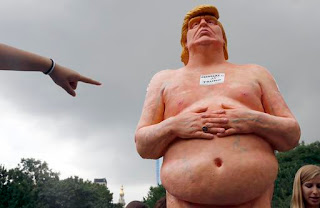 Weekly explanation: I'm making this list for one reason.  If the President in the White House had a 'D' next to their name, the same House and Senate Republicans who are quietly mumbling "ignore the man behind the curtain" would be having a very different reaction. Everything on this list would've garnered at least a press conference, many would've triggered official Congressional investigations, and some would've lead to impeachment proceedings.  Instead, the GOP's insisting the demon baby isn't theirs.

This list is longer, with Easter out of the way, so prepare for April showers! (let Trump know that phrase has nothing to do with urine...sigh...)


WOW!  One of the things to keep in mind when you go through these lists is how no Democratic President had a list of this magnitude, displaying this level of bad behavior, poor judgement, law violations and partisan agenda mandating, each week!  Nope, no Democrat ever came close to having a weekly list this bad for an entire year in office.  Every Republican who ignores these weekly disgraces undoubtedly had red hot meltdowns when Former President Obama or Hillary Clinton did anything 1/20th a serious as any ONE item on this list.  Trump is a horrific President, the worst kind of leader; a self centered opportunist who's only concerned about what the office can do for him and his family. And he's guilty of committing treason!!! 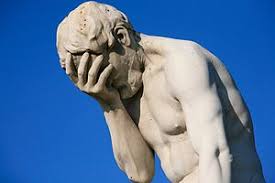 But be careful!  The evil entities behind Trump are already working their long game.  The limiting of internet access, the suing of the media, the crackdown on the legal system by going after individual courts...we need to make sure this country doesn't slide into Fascism while we all focus on this buffoon's Twitter temper tantrums. 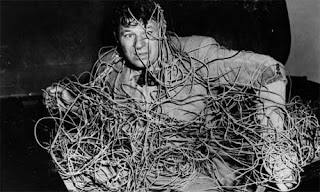 Posted by Matt McNeil at 7:56 PM No comments:

I really liked 'La La Land,' even though the ending created a lot of mixed emotions within my family.  But enough about that.

I traveled to LA twice on business, and frankly, I never saw the fun side of the LA.  I thought it was interesting.  You can feel the stress of desire everywhere you go, and that's one of the things I felt they captured in the movie.  There are tons of movies about a town where the steel mill, or the coal mine, or the manufacturing plant, or the military base are the the center of their local solar system, the catalyst for the plot.  Los Angeles is no different.  It's a place where instead of a shipyard or a large farm, it's the entertainment business.  Even though the two main characters are portrayed as being on a trajectory of success, it displays the ugliness of the industry (especially in Emma Stone's character), while at the the same time relishing in the beauty of Hollywood.  It's definitely written from a local's perspective.

I especially liked how Ryan Gosling's character was portrayed; the jazz musician trying to make it in a town known for movies.  My whole family enjoyed it.

Here are some clips.


Have a great weekend everyone.

Posted by Matt McNeil at 8:58 PM No comments:

Last night, the St. Louis Blues goalie Jake Allen, who was described as "dominant," and "one of the best playoff goalies ever"(?!?), was beaten by the 8th seeded Nashville Predators 4-3 in Game 1 of their Stanley Cup Western Conference 2nd round playoff series.  Those four goals were more than the Minnesota Wild scored in their first three games against the Blues in their first round matchup, combined!  So is Allen, as he was described repeatedly during the first round match up, really that good, the second coming of Jacques Plante, or did the Wild really lay an egg?

On paper, an NHL team in Minnesota should be a dynasty team.  A knowledgeable and loving fan base; a never ending steam of America's best young high school hockey players all dreaming of being on their home state's NHL roster; money never being a real issue; a top of the line facility with arguably the best sheet of ice in all of hockey; and a state population who's been let down repeatedly by professional sports teams, a population looking for any reason to clear the family photos off the mantle and build a shrine to honor the sport TRUE Minnesotan's understand!  Over the years, Minneapolis/St. Paul has gone back and forth favoring the Vikings and Twins in their respective sports, but trust me; this city wants to be a hockey town.

Instead we've been treated to a milquetoast version of hockey.  In 17 seasons of Minnesota Wild play, they've only made the playoffs 8 times, less than 50% of the time, in a league where over 50% of the teams make the playoffs every year.  The furthest the team has gotten is the Western Conference finals, in the third year of their existence, where they were quickly swept aside by Anaheim.  Two times we made it to the Western Conference 2nd round, only to get knocked out both times by Chicago, and five of the 8 times we've been to the playoffs, we didn't even make it past our first round opponent.

This year particularly hurt.  If you watched the Wild this season, they looked different.  They were crisp and clean, tough when they needed to be, and made good teams look weak.  And they could score at will!  During the cold of January and February, I found myself starting to believe a Stanley Cup Final was finally within our grasp!  Could this be the year?

Then came March.  Seventeen games between March 1st and April 1st.  Total wins: 4.  I understand the schedule bunched up a lot of games towards the end, but the Wild didn't even look like the same team.  We lead the Western Conference by 6 points.  By the end of the season, we were lucky to be in 3rd.  The Chicago Blackhawks seemed to be the main catalyst for the fall, having gotten under the Wild player's skin, making Minnesota look like doe eyed teens ogling their childhood heroes.  They had a chance to vanquish the demon.  Instead they allowed the demon to control them again, ruining the teams chemistry and flow.

They had a four game winning streak at the end of the season, leading to false hopes they'd righted the ship as they limped into the playoffs.  They were matched up against St. Louis, coached by (in my opinion) one of the worst coaches in the NHL, former Wild coach Mike Yeo.  The Wild quickly handed away home ice by losing Game 1.  Before anyone says "Matt, in Game 1 the Wild threw everything at them and the still could't win," well whose fault is that?  Nashville didn't seem so intimidated by the Blues, on the road, for their Game 1.  The Wild then put themselves in a nasty hole by losing Game 2.  Instead of bouncing back for Game 3 in St. Louis, they once again played like a bad Big 10 team. They finally played like the pre-March Wild in Game 4, getting their only win in the series, but then pathetically exited the playoffs, losing a game of catchup in Game 5.  What made this exit sting even worse was the only team which might've given Minnesota fits in the entire NHL, Chicago, was eliminated in four games themselves.  This was our year, and the Wild blew it.

But it's how the Wild lost the series which points to a long term mentality problem within the organization.  In every game outside of 4, they had to come back, seeming to not take the game seriously until deep into the third period.  If the team had played in Games 1-3 like they played games 4 and 5, they would've probably won the series in 5 games.  This has been the history of the Wild.  They've learned they don't need to play great, just play good enough to keep the critics from ripping them apart.  If this team was in Canada, the media and fans would be tearing them to shreds.  In polite Minnesota, we say "well they tried their best."  The only reason the team won Game 4 is because the fan base started to turn on them.  The roster, loaded with talent, realized they needed to do the very least to keep the wolves at bay.  Anyone who comes off that series feeling anything positive is delusional, but already, the Wild are putting forward their chipper chants of 'we'll get them next year!'  No, no you won't.

After 17 years, the Wild have finally graduated to the pantheon of Minnesota sports franchises, embracing the motto:  "Watch us, enjoy a game, but don't ever think we're going to win it all.  If you do, we'll only break your hearts!"  They join the Vikings, T-Wolves and Twins ('91 was 26 years ago...sigh...) in our deep pool of sports pain and ambivalence.  At least I can enjoy Minnesota United FC.  As an expansion team, any wins they get are unexpected.

Here's this week's list of insanity coming from President Trump and his White House for the week beginning 2 PM Friday, April 14th to 2 PM Friday, April 21st.  This is likely not all of the Trump team's transgressions, but it's most of them. 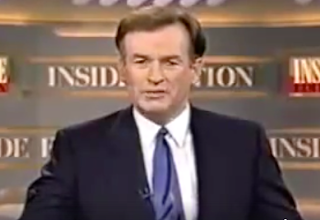 Weekly explanation: If the President in the White House had a 'D' next to their name instead of an 'R', the same House and Senate Republicans who are purposely ignoring the disaster unfolding around them would be having a very different reaction.  Everything on this list would've garnered at least a press conference, many would've triggered official Congressional investigations, and some would've lead to impeachment proceedings.  Instead, they're terrified anyone who dares look at the never ending scandals consuming the White House will turn to stone; an orange, hairy, urine soaked stone...

Let's roll the dice to see if we get Yahtzee!

The list this week was not as long, nor did it have nearly as many bombshells as usual.  I think Easter had a lot to do with that.  With the House and Senate off for a good part of the week, there weren't any Republican committee hearings with begrudged acknowledgments of more damning evidence of Trump/Russia connections.  Then again, until the Chinese intervened, it was looking likely the US would be at nuclear war with North Korea by the time the Easter Bunny arrived, so...progress???

On Bill Maher's show on Friday, Rep. Seth Moulton of Massachusetts called out Republicans, saying 'they're not stupid.  They lack courage.'  They're too afraid to do their job.  Please call your Senator and Representatives and demand a full INDEPENDENT investigation into the connections between the Trump Campaign/White House and Russia.  These cowards need to understand they should be far more afraid of the American people than they are of Trump.

And for God's sake people, VOTE!!! 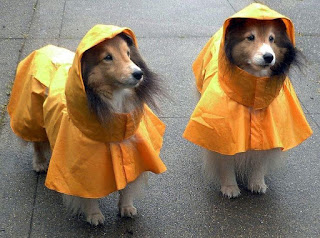 Posted by Matt McNeil at 9:21 PM No comments: