All Republicans Will Vote For Trump

Right now there's an optimism in America.  After three plus years of the biggest mistake ever made as President, the feeling is our long national nightmare will finally be over.  Not only are Democrats truly united for the cause of a Vice President Joe Biden victory, but many independents are shifting dramatically towards Biden.  Even moderate Republicans are signaling they too are leaning to vote for the Democratic challenger.
Don't believe that last sentence for a second.
Let's face facts.  Republicans knew Trump was Trump, and they still voted for him.  They knew there were questionable business practices at best with Trump's record, and they all still voted for him.  They knew he'd paid a porn star and a playmate to keep quiet about something, and they all still voted for Trump.  They saw him openly mock a disabled man, something he initially bragged about doing, and they all still voted for him.  They heard Trump's own words, bragging about sexually assaulting a married woman, talking about how if you move on them quick they'll do whatever you want, sounding shockingly like a serial sex abuser (something else there was copious evidence of) AND THEY ALL STILL VOTED FOR HIM, EVEN THE EVANGELICALS!
They will all vote for Trump again in November of 2020.
This election was never about getting Republicans to vote with Democrats.  It wasn't!  It's always been about getting a large portion of the 110 million registered voters who sat out 2016 to the polls on November 3rd.  You can not trust Republicans.  They're desperate to never have to admit they were wrong, even though history will undeniably show they turned to an openly racist jackass AFTER the first black president.  They still try to excuse their 2016 vote by saying "Democrats shouldn't have made Hillary Clinton the nominee."  This was never about the Democrats.  This was always about Republican voters.  They voted Trump!  They created this catastrophe, with a smile on their faces.
Sometime around mid October, the White House and Fox News will accuse Biden of...something, beginning three weeks of non stop coverage of the "Biden Scandal."  The goal of this smear campaign won't be about stopping Democrats from voting for Biden.  This will be about giving Republican voters culpability.  The argument will be "sure Trump hasn't been the best President (160K dead - "It is what it is."), but Biden has THIS scandal too.  Even though he's a disaster, you can vote for Trump with a clear conscious!"
And most of them will.  Of course, on November 4th the truth will come out; the made up Biden scandal was completely fabricated (although if Biden wins, Congressional Republicans will keep insisting there are unanswered questions, with calls for 8 or 9 investigations).  Regardless of who wins, Republicans will insist they were right to vote for Trump again because of "uncertainty."  Remember, Republicans love the mantra "never ask for permission; ask for forgiveness."
You might be saying "Fine, but if all Democrats show up, we're good!"  The Left as a whole is HORRIBLE at voting.  THEY ARE.  There are Democrats screaming for change today, who on November 3rd will suddenly be "wait a sec?  That's TODAY?!?  I was going to  hang out with friends all day.  What the big deal if I miss it?  The rest of the country will cover for me."
NO THEY WON'T!!!  Most of the 110 million who couldn't be bothered to vote with Trump on the ticket in 2016 were Democrats!  They were hanging with friends, or sleeping in, or too tired, or binge watching a TV show in 2016.  The good news is there should be early voting and voting by mail which really does remove any excuses, but still...HOUND YOUR DEMOCRATIC FRIENDS TO VOTE!  Tell everyone "if you didn't vote in 2016, let's look at early voting options to make sure you don't leave this until the end." 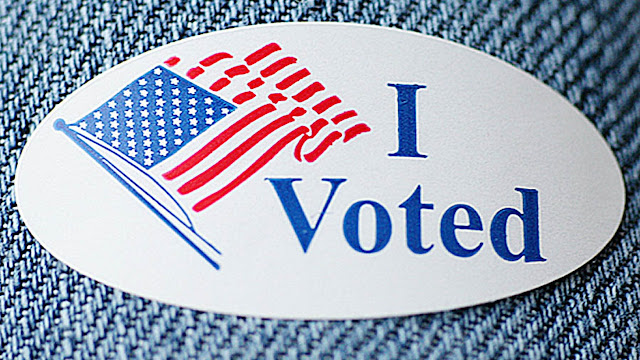 My biggest fear right now is a Blackwater/Russian/Saudi hit squad killing Biden in the days before the election.  The chaos which ensues will lead to Trump bragging how even though he was 20 points behind in the polls, he knew he would beat Biden, dead or not.  If this country has another four years of Trump, it'll take a century to undo all the damage he'll have caused.  THEN Republican voters will insist they never supported Trump...whom they voted for twice.  They'll probably come up with a conspiracy of how the Democrats were the actual voters for Trump.  "Wasn't me! They bused in Muslims, black people, and Antifa from the cities and they all voted for Trump!"
Like I said, they'll never freely admit they were wrong.
Posted by Matt McNeil at 7:36 AM